What is a Crystal?

Crystals are formed by the Earth, they contain an assortment of minerals which create the many colours. They experience the Earth’s pressure and temperature. A diamond, for example, forms deep in the Earth and only comes to the surface through the power of a volcanic eruption. This deep Earth experience makes it the hardest of crystals. The action of the volcano also creates other crystals such as Black Obsidian, which is a glass formed by the heat of the lava flow.
Quartz is one of the most common crystals on Earth and, when mixed with other minerals, it forms other familiar names such as Amethyst, Citrine, and Aventurine.

What is Crystal Healing? 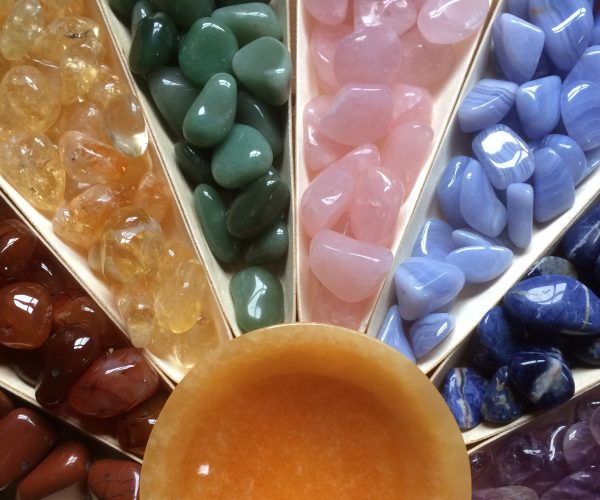 The human body is made up of minerals. The food we eat absorbs minerals which then replenishes our own stock. Since crystals are also made of minerals, it follows that their vibrational properties will work with our own.
The easiest way to feel this is by working with a chakra set. The chakras are our energetic centres and each resonates with a different colour. Placing a crystal with a similar resonance upon each chakra will help them work more effectively.
Stresses of daily life and emotional ups and downs take their toll on us and this will affect our chakras. When this happens we can find ourselves tired and depleted. Placing a crystal upon each chakra before going to sleep is a very effective way of having a good and peaceful night’s rest.
In a crystal healing session, we work with the chakras to repair the energetic system. We also look for blocks where energy has stagnated and use crystals to clear them. It is not unusual, once the crystals have been laid upon us, to feel that we are twisted or bent into a different shape, even though we are lying flat on our back. This is the power of the crystals working, by the end of the session you will feel as though you have had a thorough ‘retuning’.

Why I Work With Crystals

If, like me, you were one of those children who loved to comb the beach for bright shells and pretty coloured stones, you will have made friends with many forms of sea tumbled rocks. I was twelve when an acquaintance of my mother gave me my first tumbled stones. I felt as though I had been given a great treasure.

Although I loved these crystals I did not get involved with them again until I was around forty. A crystal shop opened in the town where I worked. It had been there for a few months and I had window gazed but not gone in. Then, one day, I was passing and it felt as though I was being called inside. In fact, I was impelled to go in and that was the moment I began to form a closer bond with crystals.

I was a collector for many years before they showed me that I could work with them more deeply. I began to incorporate them into my shamanic work using intuition. So it made sense to take a crystal healing course. I enrolled with Philip Permutt, The Crystal Healer. Afterall, it was his shop that had first raised my awareness to their call.

To Book a Crystal Healing Treatment

Allow one hour for a treatment.
Fee
Crystal healing: £40